Save the Children  believes every child has the right to survive and reach their full potential – your donation can make that happen. They go where others won’t to ensure no child is left behind. They know that their future is our future.​
Animal Justice Canada is a non-profit group comprised of lawyers forming Canada’s only national animal law organization working to protect animals from cruelty and neglect. They work to pass strong new animal protection laws, push for the prosecution of animal abusers, and fight for animals in court.
The term "Avaaz" means "voice" or "song" and the Avaaz organization is now a 40-million-person global campaign democratic network.  Launched in 2007, it is an Internet organization that is empowering millions of people to take action on issues worldwide from corruption and poverty to climate change and conflict. Avaaz campaigns in 17 different languages is now working within every Nation in the world to ensure that the views and values of the people inform the decisions that affect us all. If you have not already, please join us!! Every voice matters.
Toronto Pig Save  "uses the strategy of bearing witness to animals in need outside slaughterhouses. We use a love-based community-organizing approach informed by Leo Tolstoy and Mahatma Gandhi. We develop expanding team leadership in order to build an animal justice grassroots movement. Our demands are to replace animal agriculture, fields used for feed crops and slaughterhouses with wild spaces, forests and animal sanctuaries."
Mercy for Animals works to create a society where all animals are treated with the compassion and respect they so rightfully deserve. M﻿FA serves as a voice for animals through proactive consumer education initiatives, cruelty investigations, corporate outreach, and legal advocacy.

Farm Sanctuary is an American animal protection organization founded in 1986 as an advocate for farmed animals.
The Council of Canadians are a voice for social and environmental justice. They work to hold governments accountable and challenge the unbalanced power of corporations, promoting positive social change in Canada and the world.

Through evidence-based research, education and policy analysis, the David Suzuki Foundation works to conserve and protect the natural environment, and help create a sustainable Canada. They regularly collaborate with non-profit and community organizations, all levels of government, businesses and individuals.
Canadian Biotechnology Action Network (CBAN) ﻿is﻿ committed to working to promote food sovereignty and democratic decision-making on science and technology issues in order to protect the integrity of the environment, health, food, and the livelihoods of people in Canada.
The Wolf Lake Coalition represents businesses and organizations that support the full protection of Wolf Lake and the surrounding ancient pine forests. Wolf Lake is in the south-western part of the greater Temagami canoe area, 50 km northeast of Sudbury. It is at the heart of the world’s largest contiguous ancient red pine forest and lies on the Chiniguchi River, a popular wilderness canoe route.Old growth red pine forests are critically endangered and remain on only 1.2% of their former extent.The wolf lake ancient forest is being scarred and fragmented by mining exploration.In 1999, the government of Ontario committed to protect the Wolf Lake ancient pine forest.  The Chiniguchi Waterway Provincial Park was created upstream and downstream of Wolf Lake.  However, mining claims and leases surrounding Wolf Lake prevented the inclusion of that area within the park. Instead, it was designated a Forest Reserve, which allows mineral exploration and mining, but prohibits logging. When the mining claims and leases expire, they are to be added to the neighbouring park. But, Ontario recently renewed the Wolf Lake area mining leases for another 21 year term, and could continue to do forever if supporters of Wolf Lake do not take action. 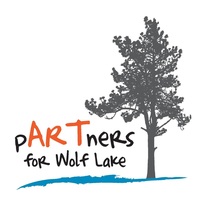 pARTners for Wolf Lake hosted a 4-day camp for artists in August 2013, at Wolf Lake. Painters, photographers, poets and potters came together to create works of art in support of the Wolf Lake Coalition's campaign to see the world’s largest old-growth red pine forest protected. My painting, Passionate Resistance, was done as a part of this important project. The works culminated in a book entitled "Spirit of the Red Pine: Art to save the old growth forests of Wolf Lake," as well as exhibitions in North Bay, Hamilton and Sudbury, Ontario. To order a copy of the book please go to: http://www.lulu.com/shop/search.ep?keyWords=spirit+of+the+red+pine&type=

In 1999, the Ontario government promised to protect the 300-year old Wolf Lake pines, located in the northeastern corner of the City of Greater Sudbury. The Wolf Lake Coalition calls on the Wynne government to honour the 15-year old promise to permanently protect Wolf Lake within the Chiniguchi Waterway Provincial Park. The Coalition is made up of 30 local, provincial, and national organizations and businesses.

New research published in June in the journal Biodiversity and Conservation, calls the Wolf Lake old-growth forest a, “scientifically irreplacable system.” Red pine once covered much of northeastern North America, including what is now downtown Sudbury. Extensive logging and mining have eliminated these forests on all but 1.2% of their original extent, making them a critically endangered ecosystem. The Wolf Lake forest is more than triple the size of the next largest remnant. There are two mining leases and dozens of mining claims in the Wolf Lake forest.
Earthroots  is a grassroots environmental organization dedicated to protecting Ontario's wilderness, wildlife and watersheds through research, education and action.
Kripalu Centre for Yoga and Health
Omega Institute for Holistic Studies
The following poem was inspired by one of my paintings. Thank you for sharing this with me, Elizabeth!

​at Daybreak in the hills
Eva swam in three lakes:

beyond the next winding
through the macramé of cedars
I watched her
frolicking in ruches of purple waves
with the rose-dimpled sun.